On the border between the Pays d’Auge, the Côte Fleurie and the banks of the Orne lies a site whose history was crucial in the reconquest of France and the defeat of the Third Reich.

Just 30 minutes from the beach campsite, the Merville Franceville Battery allows you to relive the greatest hours of history thanks to the setting up of a museum and a visit to this reconstituted stronghold, plunging you into the heart of one of the most crucial battles of the landings.

The visit to the Merville Battery takes 2-3 hours and its impressive scenario of the attack on the site is breathtaking.

A strategic position, an epic outcome, welcome to one of the most emblematic places in the history of the landings.

As the Germans established their positions on the territories conquered during the Battle of France and the time came to administer them, the question of the defence of their acquired positions became crucial.

The “Atlantic Wall” project was set up. Its aim was to protect the 3rd Reich from possible attacks and invasions on their western flank, from Biarritz to Dunkirk. Normandy being of course the coast closest to the British, it was a priority in the reflection of this coastal defence.

The Reich, therefore, gave responsibility to civil engineer Fritz Totd and his Totd organisation to design a set of structures capable of withstanding assaults and repelling future enemies.

For those parents who are looking for a little rest, they will be able to lie down with their toes out in the sun. 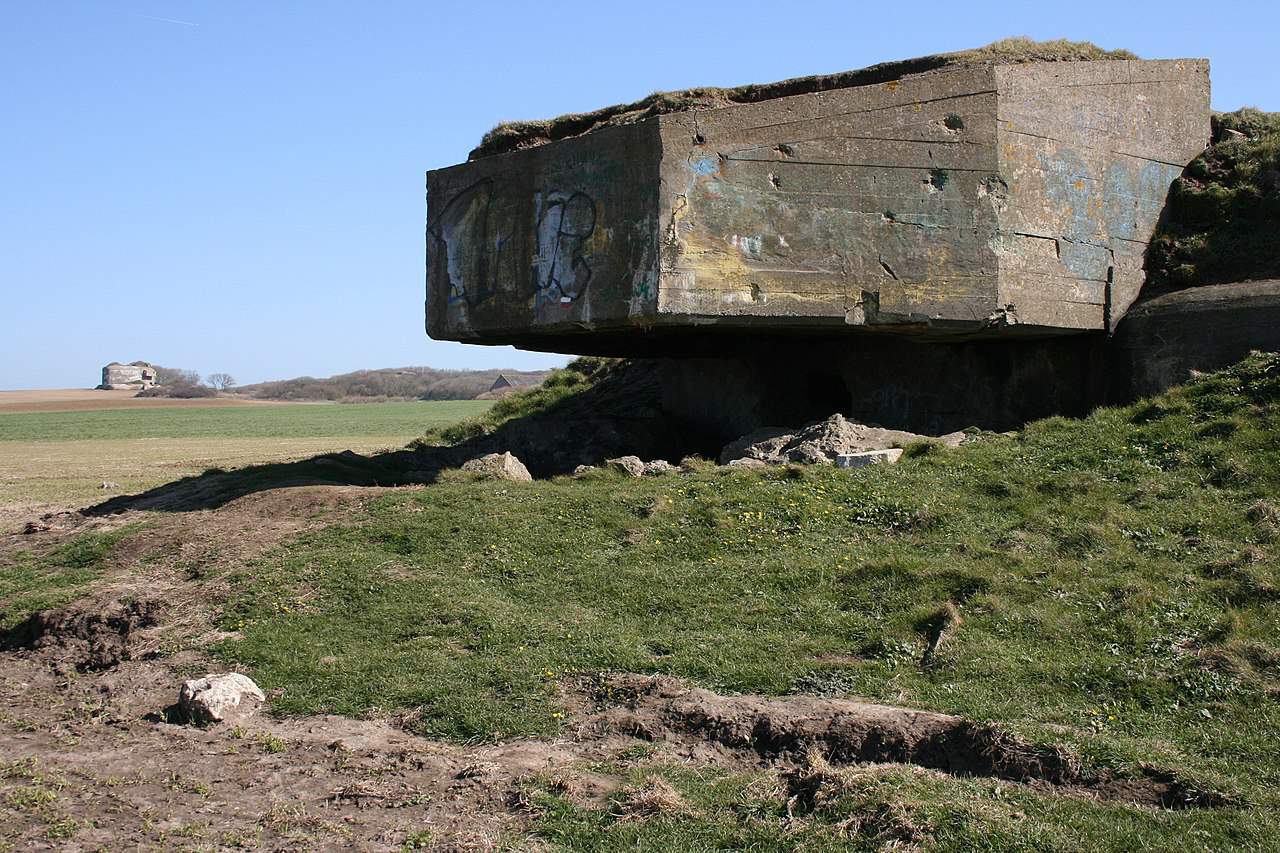 The hastily constructed ditches did not have time to achieve the objective of enclosing the site when Rommel arrived and was responsible for the defence of the Atlantic Wall.

When he visited the site he found, instead of 150mm guns, four 100mm Skoda guns dating from the First World War, but still capable of firing eight shells per minute.

The firing of these guns was carried out blindly as they were located two kilometres from the coast.
Targets were signalled by telephone from an observation post directly on the beach.

It is not clear whether Rommel, seeing this marshy area as an ideal trap, decided to drown the area to slow the enemy advance, or whether it was the heavy rainfall in the past that made it difficult for the Allies to cross.
In any case, across the Channel, Operation Overlord was launched and the impressive size of the Merville Franceville position detected by the Allied air force convinced the generals to consider it as a priority target for D-Day.

Indeed, the H611 pillboxes were normally equipped with artillery capable of attacking 17km away and therefore of undermining the objective of Sword Beach, or Ouistreham Beach.

Totd, inspired by the fears of Vauban 500 years before him, saw in the place of Merville Franceville an ideal position to protect Caen, the capital of Normandy, from the maritime invasions that could arise through the Orne and its estuary.
He therefore called on Rittmann, a German company with offices in Houlgate, to design what would be one of the main objectives of Operation Overlord four years later.

The local population was put to work under the occupation regime, willingly or unwillingly.

Large-scale resources for a major objective

Initially, four casemates were built, the largest of which, type H611, required no less than 1400m3 of concrete. The other three were smaller, requiring 500m3 each.
In order to camouflage the structures, all of them were buried so as not to be detected by the Allied air force.

Then came the installation of heavy defensive military equipment including a FLAK (Flugabwehrkanone, the famous anti-aircraft gun), anti-aircraft shelters and ground devices such as Tobruk machine guns and anti-tank ditches in anticipation of a massive invasion of the Atlantic alliance that was already taking shape. Two huge barbed wire fences and a minefield completed the system. 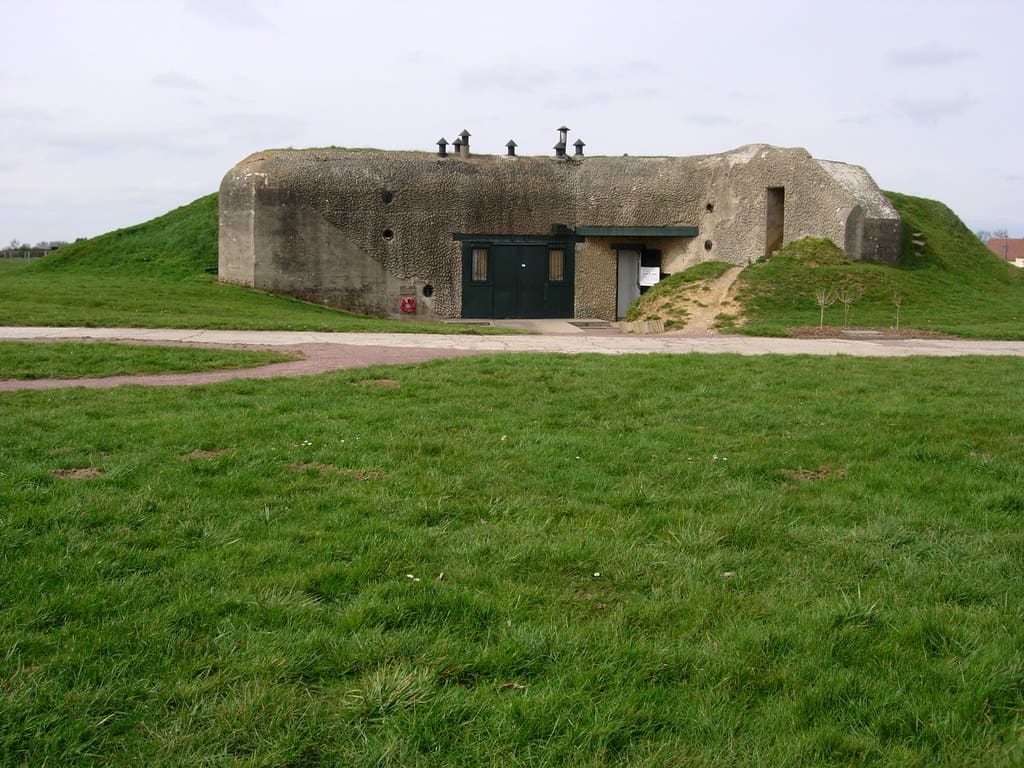 For several weeks now, the battery had been the target of intense bombardment despite the protective fire of the FLAK. The vast expanse of the battery was thus already a moonscape pounded by air raids.

Lieutenant-Colonel Otway, in charge of the operation, had foreseen a complex plan mixing intensive bombardments, infiltration operations and emergency solutions by launching a light cruiser off the coast, the HMS Arethusas under the British flag.

Unfortunately, in the early hours of 6 June, nothing went according to plan, mainly because of cloudy weather and confusion between the Orne and the Dive, which scattered the drop zones for men and equipment.

By the time of the initial rendezvous, the forces were scattered over a 16 kilometre area.
Shortly afterwards Otway had only 150 men instead of the planned 600, without their equipment and heavy weapons.

However, the Lieutenant Colonel had to act quickly and decided to lead the assault by regrouping his forces into four assault groups.

The German machine guns were spotted as they passed the minefield and decimated the flank of the attackers, who in the chaos charged with bayonets and grenades. The second section fired on the main gate and created a diversion that split the German defence, which felt under attack from all sides.
Two gliders landed and the paratroopers arrived to support them.

With no way to breach the barbed wire walls, the British soldiers spread out over them to form a real passage for the others.
The minefield would kill many others for lack of marking.

After a fierce fight by the elite troops, all the guns were taken by the assault and the battle did not end until 5am.
Of the 50 German soldiers, only 6 were left able to fight and about 30 were wounded. Of the 150 British paratroopers, 65 were killed.
But the objective was achieved. And the road to the liberation of Paris could be resumed.